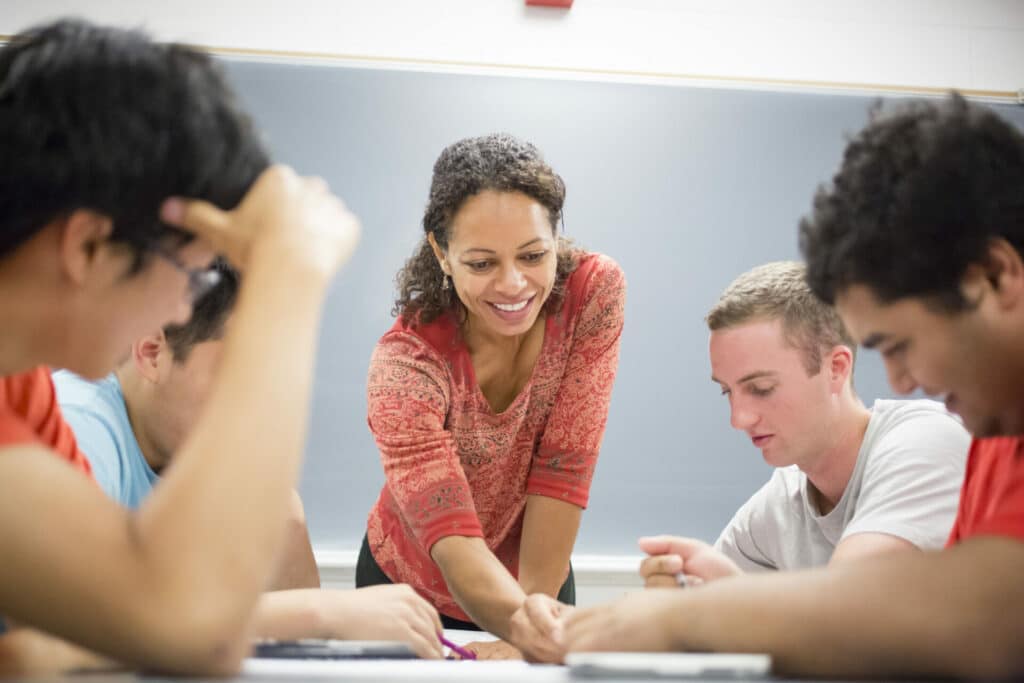 In her 2019 TED talk, Nadya Mason cuts open a Etch-A-Sketch on stage. As the crowd watches, she plays with the magnetic filings and observes the sticky goo oozing out of the toy. Leading by example, she wants the audience to get personal with their technology: to dismantle, test, and question their everyday objects in a hands-on way.

“I wasn’t encouraged to tinker when I was growing up,” says Mason, a physicist at University of Illinois Urbana-Champaign. “I now emphasize the value of tinkering partly because I feel like I missed out when I was younger.”

Mason studies unusual materials—superconductors, magnets, and other materials with properties dominated by quantum effects. Descriptions of these systems get mathematical quickly, but Mason seems to have developed a personal relationship to them, not unlike her with the Etch-A-Sketch. She anthropomorphizes the electrons, photons, and phonons within. “If we imagine the inside of materials, they start to become alive for us similar to how a biological cell seems like a living object,” she says.

Through the materials science center she directs, she has spread this way of thinking, helping to design a middle school outreach program where students write songs and poems and create art about materials science. Mason spoke with 1400 Degrees about her research and how everyday objects spark her curiosity.

Condensed matter is the physics of stuff. We’re surrounded by wood, metal, and electronics that we take for granted. But we should be wondering more about materials. I try to motivate condensed matter by just asking one simple question: why does a metal conduct electricity? Is it little dudes inside running from one end to the other? These are deep questions, as deep as what makes a star burn bright.

And I really do imagine electrons as little dudes. They’re running around in the material, talking with each other. If I don’t have the cartoon picture in my head, it’s not fun for me.

You study graphene, topological insulators, and superconductors. What’s the throughline?

My deep interest is in electron interactions, and how local interactions result in macroscopic effects. Individual particles interact to create electricity, superconductivity, and magnetism. I’m also interested in small-scale or new materials like graphene and topological materials, where you can observe quantum effects.

You’ve been studying superconductivity since you were a graduate student. How has the field evolved?

When I began, much of my research was related to understanding high-temperature superconductors, which has been the long-standing goal of the field. But progress has been slow. These days, the emphasis is on superconducting quantum bits, which Google and IBM are using in their quantum computers. These qubits are basically a sandwich of an insulator between two superconductors. One area of investigation is whether new materials can be used in the sandwich, such as graphene. People are also coupling different materials to superconductors to develop devices and to understand the fundamentals of correlated electrons.

What’s the most surprising result that you’ve gotten?

In a superconductor, all the electrons are paired up. These pairs move through the material with zero resistance. This is in contrast to a metal, where single electrons flow with some resistance. You can turn a superconductor into a metal by breaking up the electron pairs by putting in energy. Surprisingly, in our material we found what appeared to be broken electron pairs at specific intermediate energies. At higher energies, they would appear paired again.

The electrons were confined to a small region where they could only have certain energies. This resembled an artificial atom with electrons going around a nucleus, where different orbits corresponded to different energy levels. The electrons that were paired in the superconducting state appeared to break up, with one electron on one energy level, and the other on a different level. But when we decreased the spacing between the levels by applying a voltage, the electrons could pair up and become superconducting again.

We realized that these were called Andreev bound states. They had been predicted to exist for a long time, but no one had seen them before. We showed that it followed the exact behavior as predicted. The experiment taught us something fundamental about superconductivity, which soon after became directly relevant to the new field of “topological quantum computing,” which relied on manipulating a sort of Andreev bound state.

How do you cope when an experiment is just really not working?

It’s heartbreaking. Even now, I’ll be like, ‘Nothing works; I’m going to quit.” I go binge on some show, get a good night’s sleep, and come back. Then, I meet with my students to go through the details of the experiment. Our experiments involve fabricating small devices via very technical procedures that we have to perform perfectly every time. I try to be logical and not rush through anything.

I tell a lot of students that the third year of graduate school is the hardest. You’re finally trained; you have all this momentum; you think everything’s going to work—and then nothing does. In my third year, I thought I would be the only graduate student who would never have data. But I tell students that this is part of the process of research. That’s when you’re learning and problem solving. Then in my fourth year, things started working.

Sometimes when an idea doesn’t work, you can make lemonade. I remember a project where we were trying to study stretched graphene, but the graphene kept ripping. We ended up writing a paper about how the resistance changed when it ripped. It was a little paper, but it was fun, and we understood something. I’ve learned that small results matter. Some of my publications in smaller journals are way better cited compared to what I thought were “bigger” results. They’re clear papers on a topic that people eventually started caring about.

In 2020, many physicists participated in the #ShutDownSTEM movement, where they paused their work to consider racism in the field following the murder of George Floyd. Did that moment feel distinctive to you?

Yes. Black Lives Matter suddenly came to the forefront in the country as a whole. People I knew went out to protest. Scientists suddenly realized that it’s not an equal landscape for everyone, and that it is our individual responsibility to make change. I have not seen that sort of personal sort of reconciliation with racism before. More individuals are willing to try new things, whether it’s recruiting differently, or questioning our values when we hire and grant tenure.

That said, change is hard. Everyone’s exhausted. It’s been a long couple of years, between the elections, the pandemic, and thinking about racism and prejudice. Even though people think that they want change, when it comes down to it, it’s hard to do. But I’m not unoptimistic. Racism and bias against underrepresented groups are much more front and center, which is important. But I’m still not clear about the mechanisms for lasting change.

You’ve talked a lot about the value of tinkering. What’s the most surprising everyday device you’ve taken apart?

I don’t know if it’s surprising, but the object I take apart most is probably my vacuum cleaner. It’s one of those upright Dysons with a powerful motor in a slim and light device.

I’m very excited that Apple is going to start letting people take apart and fix their smartphones. It’s transformative, even beyond what Apple may think. It becomes technology that you can take a screwdriver to, like you would with a creaky chair.

I have to ask you about your gymnastics career. You competed as part of the U.S. National team when you were in high school. A few years ago you said in an interview that if pushed, you could still do a no-handed cartwheel. Is that true?

Yes, I could probably do that. Bodies are weird; they remember things. But I’d be sore for a while.