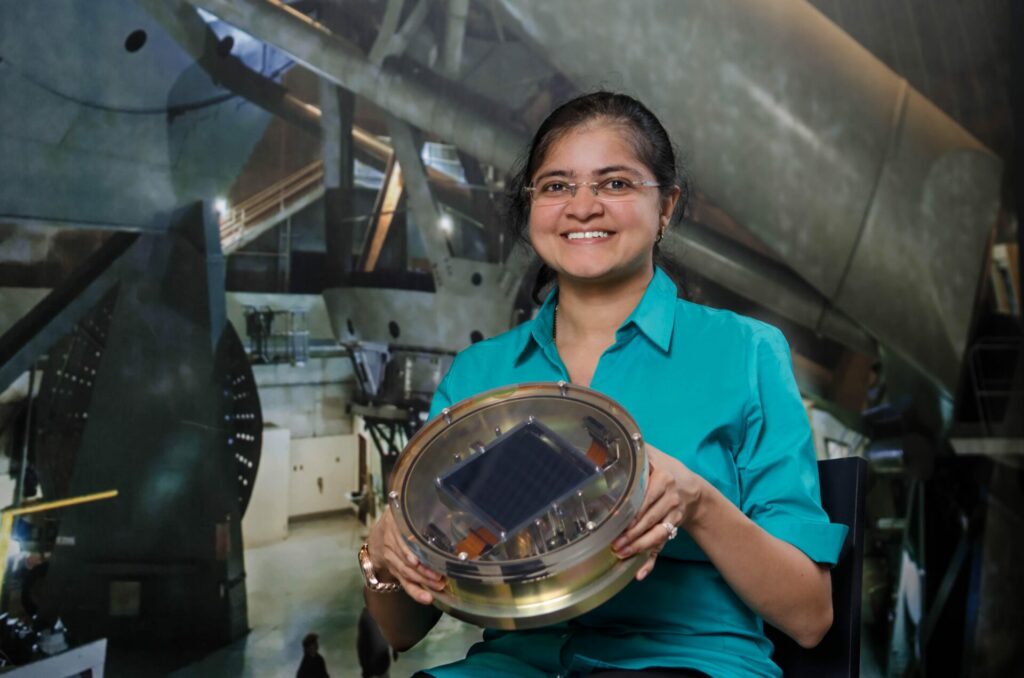 A phone alert will often jolt Mansi Kasliwal awake in the middle of the night. Its message? Forget sleeping. Telescopes have detected an unusual burst of light in the night sky, and she’d better record it. If she’s lucky, these fireworks—known as “transients”—may be a sign of a rare cosmic event: the explosion of a star, the birth of a black hole, or even the merger of two neutron stars.

But she has to be quick. “Sometimes they’re gone before you can even wait for the Earth to rotate back to the same place the next night,” says Kasliwal, an astronomer at Caltech.

When the fireworks are particularly noteworthy, she coordinates astronomers in 17 different countries to look together, in a scientific collaboration known as Global Relay of Observatories Watching Transients Happen (GROWTH). They might start observing in California and then gradually move west to Hawaii, Japan, Taiwan, India, and then the Canary Islands in Spain. “It’s like a relay race around the world, where we pass the baton to the next location to stay in the dark and beat sunrise,” says Kasliwal, who leads the group.

Kasliwal’s personal journey stretches across the globe, too. Hailing from outside Indore, India, Kasliwal grew up on a family farm that raised dairy cows and grew wheat before moving to the US in high school to pursue her dream of becoming an astrophysicist.  She spoke to 1400 Degrees about her research and how she came to study transients.

I loved astronomy since I was a child. We didn’t have an observatory in the town where I lived, but I would read so many books on it—A Brief History of Time, anything I could get my hands on.

How did you end up studying in the US for high school?

I wanted to pursue astronomy from day one, but I didn’t know how. In India, if you want to study science, the two well-trodden career paths in high school are to prepare for engineering school or medical school. There isn’t a clear path to becoming an astrophysicist. So my parents spoke to a college counselor about my options outside the country. He recommended some high schools in the US where you could take college physics, which was exciting. I ended up going to Pomfret, a boarding school in northeast Connecticut, my junior year.

What was the transition like, from Indore to Connecticut?

That first year was rough. Thankfully, I was bilingual—my mother tongue is Hindi—but the cultural barrier was steep. The school had very few international students. I didn’t know how to cook, and the dining hall wasn’t vegetarian friendly, so I think I ate a peanut butter and jelly sandwich for lunch and spaghetti with marinara sauce for dinner every day for the whole year. In India, I was used to gourmet food at home and being pampered by my mother.

What astronomy opportunities did you pursue?

I had a cool physics teacher, Mrs. Tina Morin, at Pomfret. She would take me to the University of Connecticut for observing sessions on a small telescope. Then, as an undergraduate at Cornell, I was on a team led by Professor Jim Houck that built one of the instruments for the Spitzer Space Telescope. Even though my involvement was small, I witnessed the process of discovery unravel when this observatory launched.

How did you start studying cosmic fireworks?

My advisor explained it was possible that I would find nothing, no matter how hard I looked.  But I decided to work on it because nobody else seemed interested, and I wanted carve out a piece of the universe I could call my own. I also liked how it was such a simple question. I could explain it to my mom.

Did you find anything?

It took four different attempts, but yes. And nature was more creative than I had imagined. We found many new objects—white dwarf explosions that are 10 times fainter than normal supernovae, this bizarre class of transients that made a heck of a lot of calcium and not much of anything else, and more.

How hard was it?

What is the most interesting transient that you’ve observed?

Definitely the merger of two neutron stars detected on August 17, 2017, which was accompanied by gravitational waves. That event was my wildest dream come true. I dropped everything else. We submitted three papers to the journal Science within three weeks. I had a two-year-old at the time, and his dad really supported us.

It was the first time we could simultaneously see gravitational waves and photons—from every part of the electromagnetic spectrum. We could finally confirm that gravitational waves travel at the speed of light. We also confirmed that these mergers synthesized heavy elements in the universe, like gold, platinum, and uranium.

Another fascinating thing was that the merger didn’t seem to produce a bright jet of gamma rays like many models predicted. My team came out with a model describing that the merger did produce a jet, but it didn’t get far—it had actually transferred its energy to surrounding material. Instead of this narrow jet launching at us at high speed, it was this cocoon-shaped object, coming at us somewhat slowly. This model predicted that the radio signals would be several days delayed compared to the rest of the spectrum, and when it came, the signal should rise over the next hundred days. When we submitted the paper within a month of the event, it caused heated debate—the idea sounded crazy. We’d made the predictions based on 20 days of data. But history proved we were right.

Some transients fade within hours. Do you have to rush to observe them?

I can get to the remote observing room in Caltech in 10 minutes. And then to whoever is collecting data from the observatory that night, I have to politely say, “I have this very urgent transient, and I need you to stop whatever you’re doing.” In my proposals for observing time, I write that I don’t know when or where I’ll discover something, but when I do, I need the license to bump whoever’s on the telescope. This is called a “Target of Opportunity Observation.”

That’s a lot of power.

You have to use it wisely. Because if it turns out to be a dud, you still have to face your colleagues the next time you see them in the hallway.

What are you working on now?

Previously, I studied optical fireworks. I’ve become interested in infrared fireworks. I want to know how and where the heavy elements are synthesized, and the basic atomic physics processes that form these elements emit a lot of light in the infrared.

I plan to build a series of surveyors for wavelengths beyond one micron. We’ve already built the first one, the Palomar Gattini-IR at Palomar Observatory in California. It’s a fully robotic telescope with a near-infrared camera, more than 40 times larger than any other infrared camera, and I can make a movie of the sky every two nights. I’m planning to build a second surveyor later this year. Eventually, my dream is to build one in the Antarctic, where the sky is really dark in the infrared.